Success in sports is directly related to expectations.  That’s why underdogs and Cinderella Stories capture the hearts of fans.

The 2017 New York Yankees came into the season with low expectations.  After failing to make the playoffs for the third time in four years, the team was flux with young talent.

A deep playoff run ended the 2017 season in Game 7 of the ALCS and Aaron Judge was named the AL Rookie of the Year.   A young core of stars that included Judge, catcher Gary Sanchez, infielder Gleyber Torres, and outfielder Clint Frazier had Yankee fans excited for the future.

The 2018 team, however, was a totally different story.

After a season of surpassing expectations, Brian Cashman changed the course of the organization when he went out and pulled the trigger on one of the best deals in recent memory, dealing Starlin Castro and two minor leaguers to the Miami Marlins in exchange for the reigning NL MVP Giancarlo Stanton.

Armed with a new manager in Aaron Boone and one of the most feared lineups in the MLB, expectations for the 2018 Yankees team were sky high.

Yankee fans were no longer looking forward to the future, they were excited for the present.

Players and fans had one goal on their mind – the World Series.

The 2018 Yankees went on to win 100 games and win the AL Wild Card before losing the ALDS in 4 games to the Boston Red Sox.

Despite these expectations, failing to win the World Series is not what angered fans the most. 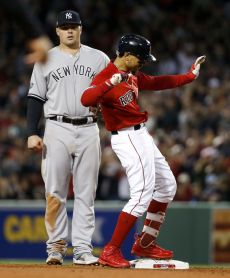 What made Yankee fans the most upset is the fact that the Boston Red Sox were flat out better than the Yankees in 2018.  From Opening Day to Game 5 of the World Series, the Red Sox dominated anyone and everyone who stood in their way.

The team that Brian Cashman had put together watched as their bitter rivals danced around Dodger Stadium.

The team that was built to win the World Series twice allowed the Boston Red Sox to celebrate at Yankee Stadium – once when they clinched the AL East Crown and again, just two weeks later, when they ended the 2018 season for the Yankees in the ALDS.

Boston has every right to celebrate.  They had one of the most successful seasons in MLB history, winning a total of 119 games in the regular season and post season en route to a World Series Championship.

There is no love lost between the Yankees and the Red Sox, and the 2018 season reignited the most bitter rivalry in all of sports.  As if their brawl in April wasn’t enough, Alex Cora threw gasoline on the fire with his comments at the Red Sox World Series parade.

Speaking about the people who wrote 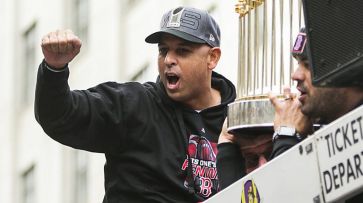 the Red Sox off after their Game 2 loss in the ALDS, Cora said, “And then we scored 16 at Yankee Stadium.  Suck on it.”

Cora’s comments will not sit well with a Yankees organization whose main goal for 2019 was already to take the throne from their rivals.

The 2018 Red Sox had the highest payroll in the entire MLB, a title that the Yankees usually hold.  Although Hal Steinbrenner has been less aggressive than his late father George, this year is as good a time as any to change his ways.

The Yankees managed to get under the $197 million MLB luxury tax threshold for 2018.  This put the organization in a great spot to spend big money this off-season and sign impact free agents.

Brian Cashman has a history of making big moves and signing impact players in an effort to help the Yankees win.  With a loaded free agent class this off-season, it was already expected that Cashman would find at least one way to improve the Yankees.

Despite resigning Brett Gardner to a 1-year $9.5 million deal, the Yankees still need to improve.  The team is loaded with talent in the outfield, yet you shouldn’t be surprised if Brian Cashman gives Bryce Harper the first $400 million contract in MLB history.

Between Cora’s comments and Red Sox success, expect Brian Cashman to spend plenty of money this off-season – the rivalry is back.

Published by From The Field Radio

View all posts by From The Field Radio

From The Field Radio

From The Field Radio